May 2, 1931 – Feb. 14, 2019 When Walter F. Olszowy began scuba diving in the 1980s, he didn’t spend his time underwater looking at fish. “He liked digging in the trenches and finding articles,” his son, Tom, said. “He had cannonballs from the War of 1812 he had taken from below Fort George, five-gallon

When Walter F. Olszowy began scuba diving in the 1980s, he didn’t spend his time underwater looking at fish.

“He liked digging in the trenches and finding articles,” his son, Tom, said. “He had cannonballs from the War of 1812 he had taken from below Fort George, five-gallon buckets full of them.”

His favorite place to dive was the Niagara River, frequently all by himself at the foot of West Ferry Street, in the treacherous swift waters that claimed the life of Buffalo Police diver Craig E. Lehner in 2017.

It was a fertile location. Assisted by a metal detector, Mr. Olszowy brought up jewelry, bags of cash, scores of discarded guns and hundreds of bottles.

“He found a bottle of Prohibition whiskey that was absolutely delicious,” his son said.

Mr. Olszowy died Feb. 14 in Buffalo Veterans Affairs Medical Center after a brief battle with melanoma. He was 87.

Born in Cleveland, the fourth of six children, he served in the Korean War as an engine room machinist and mechanic aboard the tanker ship USS Chemung and the aircraft carrier USS Valley Forge.

“The family left Cleveland while he was in the Navy and moved here,” his son said. “They ran a tavern, the Casbah at Main and Perry (streets), which later was the Hoffer House.”

Like his oldest brother, John, he got a job driving tractor-trailer trucks. But after three years, his son said, he decided he wanted to start a family and settle down.

In 1957, he married the former Florence A. Pietrusik, an office worker, and they had five children before they divorced.

He launched his own business, Olson Enterprises, in his garage in Lackawanna in 1958.

He began by making and installing aluminum storm windows, then expanded into custom fabricated metal awnings. Most of his customers knew him as Walt Olson. Now Olson Awning Inc., it has been run by his son, Tom, since he retired in 1991 after suffering a heart attack.

Mr. Olszowy took up diving when Tom and his twin brother, Paul, started pursuing the sport and he became a mainstay at the Buffalo Aqua Club. Club members often visited the awning shop on South Park Avenue in South Buffalo to melt lead to create diving weights and make floats for competitions.

Honored as Diver of the Year in 1993 by the New York State Divers Association, he sometimes logged more than 100 dives a year. 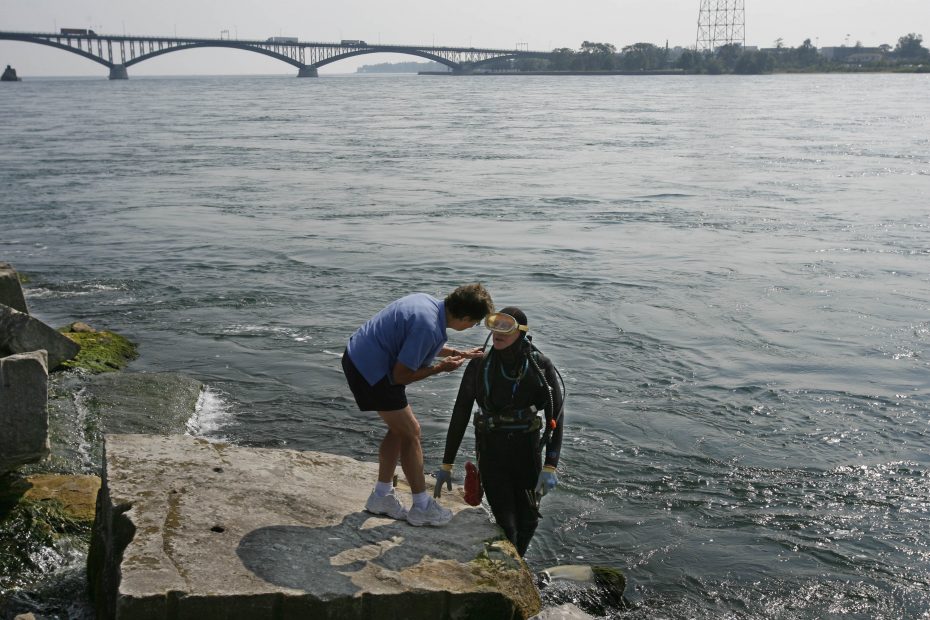 Leah Lunt helps her partner, Walter Olszowy, then 76, get ready to scuba dive in the Niagara River on July 18, 2007, at the foot of Bird Island Pier. (Sharon Cantillon/News file photo)

“He brought up big ship anchors, five, six feet tall,” Tom said. “There’s one in his backyard. He’d tie inner tubes to them, pump air into them and up they’d float.”

Most of the artifacts he found, however, he gave away. He donated historic items to museums from Dunkirk to Hamilton, Ont. The bags of cash, locking canvas deposit bags from banks, were returned to their owners.

“When we find a (working) pistol, we always turn them in to the Buffalo Police Department. The ones we find when diving are almost always used in a crime,” he told Buffalo News outdoors columnist Will Elliott in 2002.

“Many of the class rings he found, he would go to the high schools with the initials in the rings, figure out whose they were and get hold of them,” Tom said.

“I once found a class ring from Holland High School lost some 17 years earlier,” Mr. Olszowy told The News. He said he tracked down the owner, Jay James Swain, in Largo, Fla., and gave him the ring when he was in Florida on vacation.

“Swain went out of his way to thank me for bringing him this ring, but my biggest reward was the tears this ring brought to his eyes that day,” Mr. Olszowy said.

He continued to dive until he was 85.

Mr. Olszowy also had a passion for sailing. His son said he was especially proud of becoming a “Looper” by circumnavigating the entire Great American Loop, a continuous route that includes the Atlantic Coast, the Great Lakes, the Mississippi River and the Gulf of Mexico.

He completed the trip in sections aboard a 36-foot Monk Trawler, “Her Ladyship,” a cruising yacht he acquired in Florida.