On one of the Mediterranean’s most polluted coastlines, 30 young Palestinians dive headfirst into the sea off the Gaza Strip, their minds filled with dreams of Olympic glory. Aged 11 to 16, they make up a rare swimming club in the Palestinian enclave, and perhaps its only mixed-sex one. Coach Amjad Tantish talks them through

On one of the Mediterranean’s most polluted coastlines, 30 young Palestinians dive headfirst into the sea off the Gaza Strip, their minds filled with dreams of Olympic glory.

Aged 11 to 16, they make up a rare swimming club in the Palestinian enclave, and perhaps its only mixed-sex one.

Coach Amjad Tantish talks them through a warm-up before they race from the trash-strewn beach into the sea as he continues to bark instructions.

Conditions are far from perfect; the waves make serious training difficult and they have little equipment.

But Tantish explained that there are no free public swimming pools in the Gaza Strip, so they had to brave the sea.

“We lack even the simplest equipment such as goggles and swimsuits,” he said. “We don’t have any funding.”

The Mediterranean hugs the entire 40 kilometer (25 mile) western border of the Gaza Strip, but almost no one enters its waters.

Palestinian children, members of a swimming club, participate in a training session in Beit Lahia in the northern Gaza Strip, on October 4, 2018. (Photo by SAID KHATIB / AFP)

The desperate shortage of energy and lack of sanitation infrastructure mean around 100 million liters of poorly treated sewage are pumped into the sea every day, according to the United Nations.

In the worst spots along the shore the sea is tinted brown.

More than 95 percent of tap water is polluted, and water-related diseases are the primary cause of child mortality in Gaza, according to the World Health Organization.

The UN says the situation has come about mainly because of Israel’s and Egypt’s land and sea blockade of Gaza, warning recently the enclave is “imploding.”

Israel says the measures are necessary to isolate Hamas, the Islamist terror group that runs Gaza and is committed to destroying the Jewish state, and prevent it from importing weapons and rockets. Israel and Hamas have fought three wars since 2008.

Jerusalem has accused the terror group of squandering international aid on arms and fortifications instead of improving the humanitarian situation. 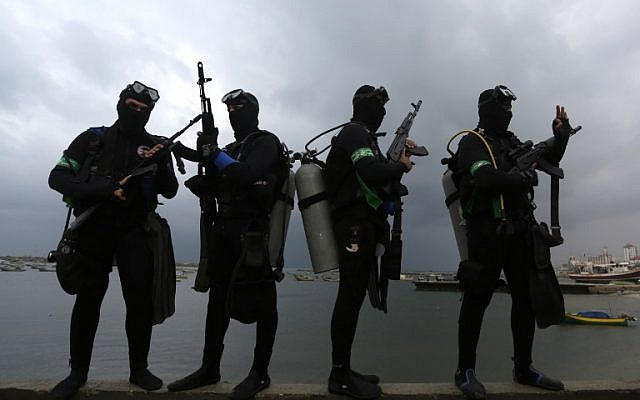 Israel has in the past seized dozens of diving suits and other swimming aids it says Hamas was seeking to smuggle into Gaza for military purposes.

During the 2014 Gaza war, a team of five Hamas frogmen entered Israel from the shore and approached the nearby community of Zikim before they were spotted and killed by an attack helicopter.

For those still willing to get wet, environmental experts say the water near Beit Lahia in northern Gaza has the lowest rates of pollution.

And so the team train there a few times a week, helping to fuel their dreams.

Tantish says the squad dreams of competing in the 2020 Olympic Games in Tokyo, though he knows that is improbable.

Even getting a visa to leave Gaza via Israel is an almost insurmountable hurdle.

“We have many opportunities to participate in outdoor training camps and in Arab competitions, but travel is a major obstacle,” he said.

Abdul Rahman, 15, said he hopes to become a “hero and achieve first place in international competitions.”

The Palestine Olympic Committee sent only six athletes to the 2016 Games. Four of those, including the two swimmers, were invited to attend despite not meeting the minimum requirements. But even they had regular access to free pools and neither was based in Gaza. 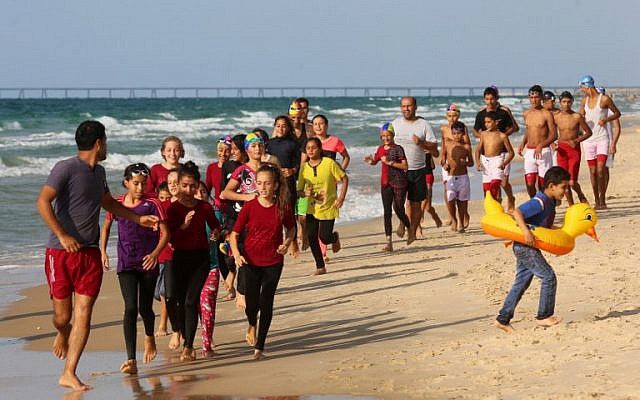 Young Palestinian members of a swimming club run on the beach during a training session in Beit Lahiya in the northern Gaza Strip, on October 4, 2018. (SAID KHATIB / AFP)

Mixed-gender activities are rare in conservative Gaza, particularly in the sporting arena.

Tantish, 42, said in the past it “was not an acceptable idea, we faced many difficulties and troubles.”

Now, he said, attitudes have changed. “Families drop their daughters off to practice swimming and the proportion of women reached 30 percent.” 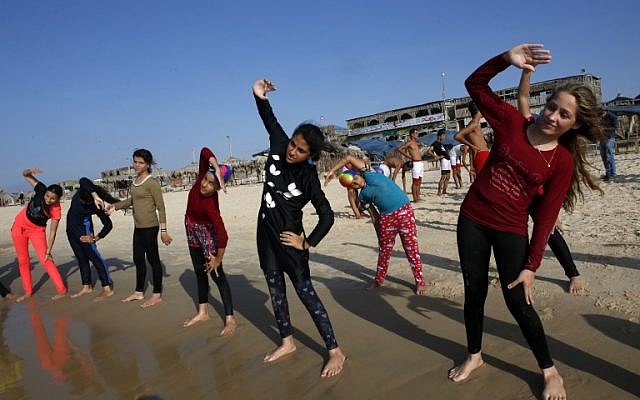 Young Palestinian members of a swimming club, participate in a group exercise on the beach during a training session in Beit Lahia in the northern Gaza Strip, on October 4, 2018. (Photo by SAID KHATIB / AFP)

Rania, 32, was walking with her husband along the beach but stopped to watch the swimming.

“I don’t think being religious stops our girls from being like other people or from having this beautiful ambition,” she said.

Most of the girls joining this year decided to get involved at their own initiative, Tantish said.

Ruqiya, 14, said she loves the atmosphere at the club.

“I started learning to swim three years ago and recently I joined the team. My family supports me and I train and play with my friends in the sea.”

She dreams of becoming a professional: “We want a large swimming pool especially to train for the Olympics.”