Some people seek adventure by climbing rugged mountains or traveling to remote countries. For Jill Heinerth, it’s diving into the ocean’s depths. Heinerth is one of the world’s top cave divers — and one of the very few women in the field. She has spent decades exploring submerged caves around the world and is the

Some people seek adventure by climbing rugged mountains or traveling to remote countries. For Jill Heinerth, it’s diving into the ocean’s depths.

Heinerth is one of the world’s top cave divers — and one of the very few women in the field. She has spent decades exploring submerged caves around the world and is the first person to dive deep into an Antarctic iceberg.

Heinerth’s dives typically blend adventure with the pursuit of scientific discovery, and she often collaborates with biologists and hydrogeologists on her underwater explorations. Sea caves are still largely uncharted territory — and difficult environments to explore — but they’re also beautiful.

“In some cases, these places are like crystal cathedrals,” she said.

“When I’m cave diving in a water-filled space, I feel like I’m swimming in the veins of Mother Earth,” she told Anne Strainchamps for “To The Best Of Our Knowledge.” “I’m in the sustenance of the planet, that very drinking water that we draw up from the ground and use to supply humanity and agriculture and industry.”

Cave diving is also inherently dangerous. Scuba equipment can malfunction, wetsuits sometimes get punctured and the underwater environment can be unpredictable and treacherous. She’s had close calls herself and once recovered the body of a fallen friend who got trapped inside a cave.

Heinerth is the first Explorer in Residence for the Royal Canadian Geographical Society. She has appeared in TV documentaries and consulted on movies with James Cameron and other directors. And she’s just come out with a memoir, “Into the Planet: My Life as a Cave Diver.”

Strainchamps wanted to know what it’s like to explore this underwater wonderland.

This transcript has been edited for brevity and clarity.

Anne Strainchamps: How do you get inside an iceberg?

Jill Heinerth: When it carved away from the Ross Ice Shelf, that all started with a crack that we’d been watching on satellite photos for more than a year. So a crack — a crevice — is a way in. So when we got to Antarctica, we looked for cracks and crevices and then would swim inside to see what we could find. And in some cases, we found these vast long tunnels and passages that let us inside the ice.

AS: What did that look like? Was it all white?

JH: You know, I thought Antarctica would be just white. My preconception of what it would be like was totally different than when I got there. It was colorful. There were layers in the ice. There was white, and there was transparent. And then the color of Robin’s eggs and every imaginable color of blue that you could picture when you were under that iceberg. 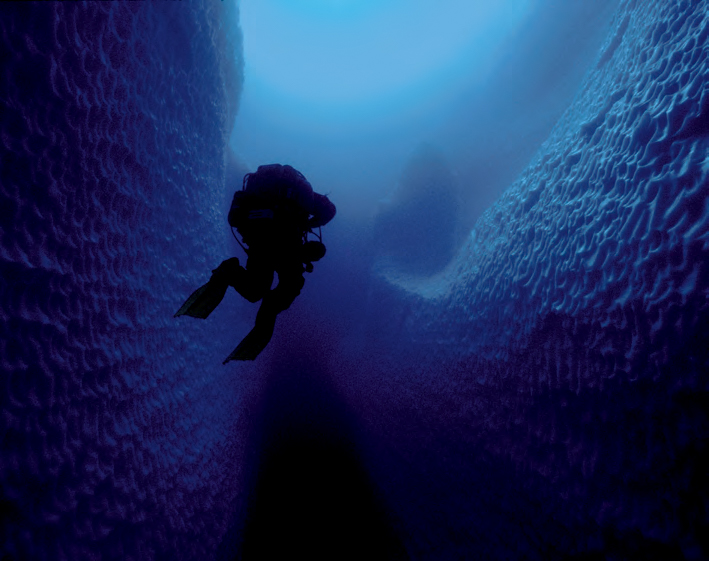 AS: Has anybody ever explored inside an iceberg before?

JH: No, no. It was a first. And when we pitched the project, I’ll be honest, it was a hypothesis. I mean, we didn’t know what we would find when we got there. That’s what exploration is — if there were a handbook, we wouldn’t be explorers, right?

AS: I have to confess before I read your book, it actually hadn’t really occurred to me that there would be caves underwater. I don’t know why, but I’m probably not the only person. Tell me about underwater caves. Are there lots?

JH: I mean, the earth is like a sponge, really. And I’m swimming within the pores of that sponge. Sometimes I get into a cave well inland, way far away from the ocean. But at other times, I dive into a small hole in the seafloor that enables me to travel through these vast conduits, these tunnels full of water inside the planet.

JH: Well, the longest caves are generally agreed to be in the Yucatan Peninsula, in the Riviera Maya. And I started exploring those back in the mid-1990s. And we were slowly linking one cave to the next cave, to the next. And we kind of agree that it’s probably one giant cave — there are many, many hundreds of miles of passages, all linking together.

The deepest caves in the world are still being explored. Many of them are over 2 kilometers (or 1.24 miles) deep. 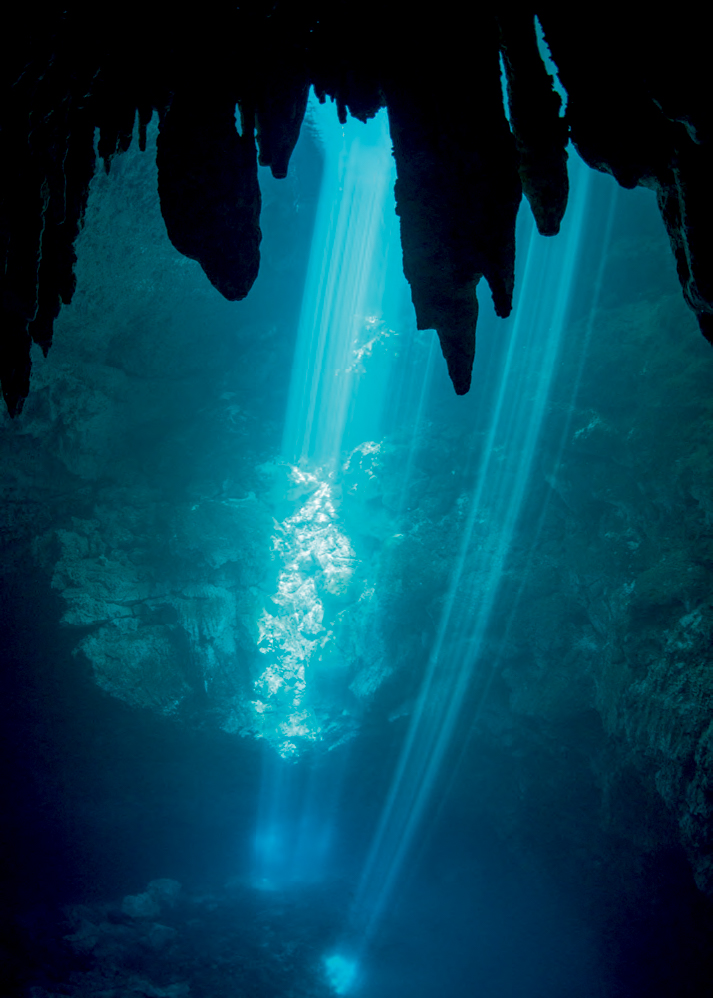 “I tried to take this very shot of the Pit, in Mexico, on a film camera in the 1990s, but the motion blur from the long exposure ruined the photo. Returning in 2018, I finally captured the image that had been haunting me since the day I got bent,” says Heinerth.Photo courtesy of Jill Heinerth 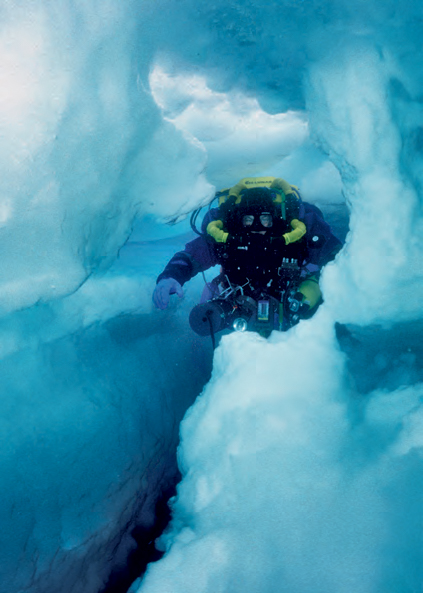 AS: So for a long time, it wasn’t humanly possible to explore the kind of caves you’ve explored. That’s much more dangerous than an ordinary scuba diving and much more technical. Can you give me an example of a time when something went wrong?

JH: Well, I had a dive that was over 300 feet deep vertically, well into a cave that had what we call a series of restrictions. A restriction is where you’re literally squeezing your body through a space it doesn’t want to fit through to get to the next big room.

And at 300 feet of depth, all of a sudden I heard this loud explosion. It sounded like someone was taking a scuba tank and smashing it against the wall of the cave. And simultaneously, my rebreather started to malfunction, and spew pure oxygen into my breathing loop. And that could have been immediately lethal, because too much oxygen to a diver at depth can cause seizures and then drowning. So I had to immediately shut down the machine and move into a manual operation to get myself back safely.

It turned out that a lithium battery had literally exploded in the life support pack and blew a hole in the back of the rebreather. And so I had to get back without any of the electronics.

AS: You know what the next question is would be: Why would you want to do something this dangerous, and then go back and do it over and over again?

JH: People are really surprised, but I think of myself as risk averse. I mean, when someone gives me a challenge — like to do something that nobody’s done before, or go someplace nobody’s ever been before — it’s just that. It’s a challenge and a problem solving exercise where I try to bring the right people, the right equipment, the right training together.

So that’s the way that I think I’m risk averse — I’m willing to train and work hard and bring the right redundancy so that I know that I can survive those worst case scenarios. People that do it for a long time — the lifers — are a lot more like me. They’re more risk averse.

AS: That’s why they’re still alive.

JH: Oh, yeah. I mean, it’s really, really dangerous. I have a list of more than 100 friends that have died cave and technical diving.

AS: How do you carry that much grief?

JH: It’s hard. There are some people within my sphere of friends that I almost look at as marked for death. Like I know I won’t be surprised when I get the phone call. But then there are others that just shock me to my core.

And I grieve all of them equally. I try to take something from each of their lives, and the lessons that they left behind, to carry and pass on to my friends. 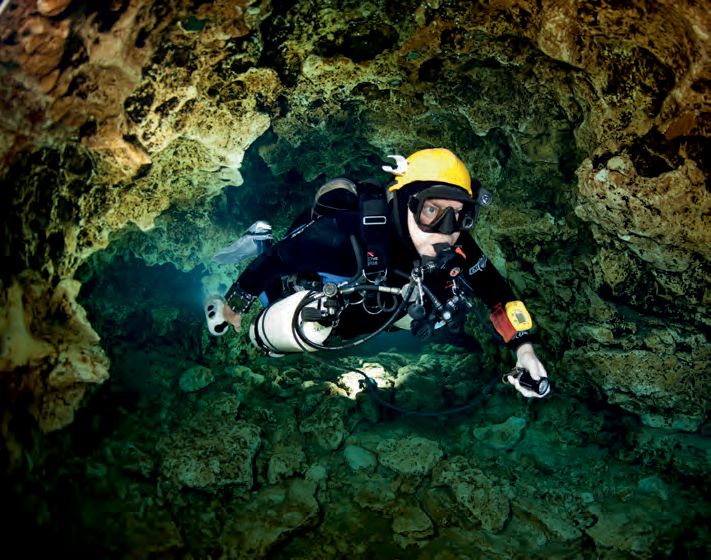 “This was the last photoshoot I had with Wes Skiles, one month before his death, and I’m grateful for it,” says Heinerth.Photo courtesy of Jill Heinerth

AS: We’ve been talking about the perilous side of cave diving, but what does it feel like to be far underground in a place that nobody has ever been before? And there’s a good chance that nobody else will ever be there again.

JH: It’s akin to walking on the surface of the moon. To me, it’s beautiful. And having a chance to document these places — capture the science, capture the film, the video, then bring it back — is incredible.

But the focus is just laser sharp. You’re never so present and in the moment. There’s nothing clouding your mind except just absorbing the opportunity and the spectacle. 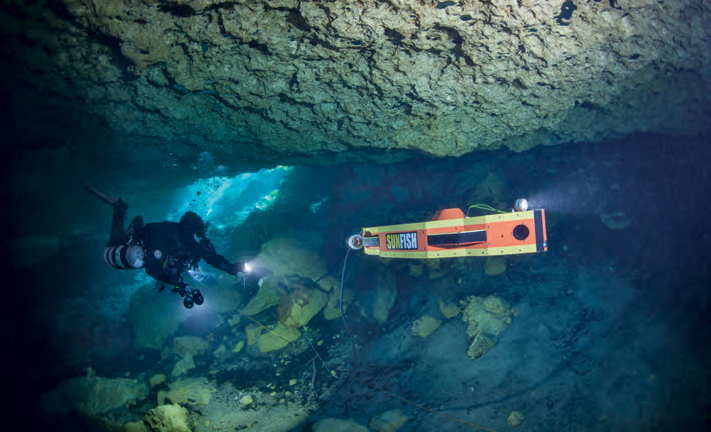 AS: Is there a science that comes out of trips like this? Besides the thrill, besides the “OK, we’re exploring it for the first time?” Why does it matter?

JH: Oh, there’s so much. The biology of underwater caves teaches us about evolution and survival. Mapping underwater caves all over the planet helps us understand the hydrology, the plumbing of the planet, and connects us to the very idea that everything we do on the surface of the earth is going to be returned to us to drink.

So I’m like the canary in the coal mine that gets to communicate about the things that I see.

We also get to work with archeologists and paleontologists uncovering the remains of previous civilizations and ancient animals. 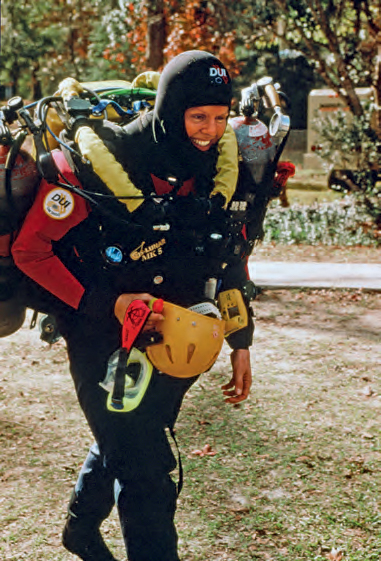 “Lugging the rebreather and two large steel bailout tanks at Wakulla Springs. I was walking with roughly 200 pounds of gear, and preparing to get in the water to add another 300 pounds to the payload,” says Heinerth.Photo courtesy of Jill Heinerth 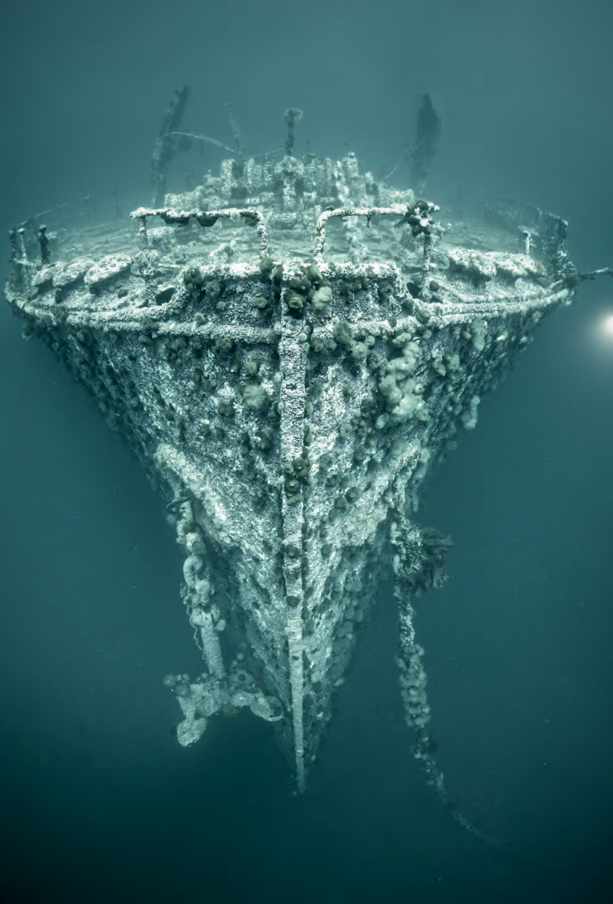 “Diving brings many wonders into my life, like the chance to explore this WWII shipwreck that was sunk by a German U-Boat in Bell Island, Newfoundland,” says Heinerth.Photo courtesy of Jill Heinerth

AS: Really? You found ancient civilizations under the water?

JH: Oh, yeah. I work with archeologists. We found the remains of Mayan sacrifices. We found burial niches with people and pottery and artifacts in them. We found Ice Age bears in Mexico and extinct sloths in Cuba. There’s so much inside of caves. They are absolute museums of natural history.