Kitack Lim and Zhong Haifeng By MarEx 2018-12-09 15:09:03 A rescue diver from China who made a series of underwater dives to rescue three people from a sunken cargo ship, received the 2018 IMO Award for Exceptional Bravery at Sea at this year’s IMO Awards ceremony held on December 6. Zhong Haifeng, senior diver and deputy

A rescue diver from China who made a series of underwater dives to rescue three people from a sunken cargo ship, received the 2018 IMO Award for Exceptional Bravery at Sea at this year’s IMO Awards ceremony held on December 6.

Zhong Haifeng, senior diver and deputy of the Engineering Team of Guangzhou Salvage, was recognized for his tireless efforts under highly dangerous circumstances, repeatedly diving into the dark and submerged cargo hold of a ship to bring out survivors.

“In China in our business we have a motto: prompt a hope of living unto others, and save the risks of death to ourselves,” Zhong said (speaking through an interpreter). “It is this motto that spurs our divers. To dive again and again, over and over, into the waters, to save those in danger from the brink of death. Every time, I saw the people who are saved. We looked into their eyes. We saw despair change into hope. We witnessed them breaking into tears. It is in that moment that our heart was filled with all type of emotions.

“I love my job. I love diving, because, at the critical moment, we can save people’s lives. The pride is mine. The glory is mine. I think I will carry on. I would like to share my experience and my zest with more colleagues. Therefore our salvation teams can become stronger and stronger. Yes of course, I most sincerely wish more and more people could pay more attention to safety, protect themselves and protect their lives. Last but not least, I would like to sincerely express my appreciation to you,” he said.

The incident occurred in November 2017. Following a collision with another ship, in Guangzhou Port, China, the bulk carrier M.V.Jin Ze Lun sank. Of the 14 crew on board, two were immediately rescued by local maritime authorities but 12 remained missing. The bulk carrier was lying on the seabed, in the main channel into the port, and a strong current made the underwater search and rescue operation extremely difficult.

Zhong was put in charge of the desperate search for survivors. After 36 hours of repeated dives, six survivors were located, trapped in the cargo hold. Zhong instructed his team to replenish oxygen to the cabin and talk to the trapped survivors, to calm them.

Zhong then dived down to the cargo hold alongside a teammate, bringing scuba diving equipment for those trapped underneath. In the afternoon of November 28, Zhong dived down six times. He taught survivors how to put on and use scuba diving equipment and personally rescued three of them in the space of one hour, despite becoming extremely exhausted. 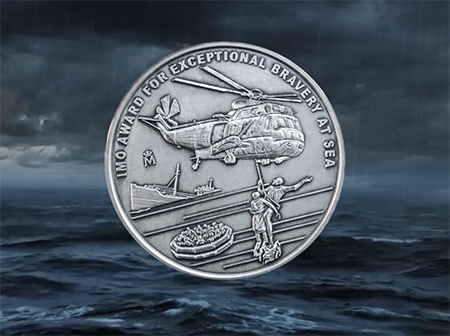 During the award ceremony, three certificates of commendation were also presented:

1. The Master and crew of the bitumen tanker Seapower, the Master and crew of the petroleum/chemical tanker MTM Tortola and the pilot and crew of the HMS Monmouth’s Wildcat helicopter Black Jack (815 Naval Air Squadron, U.K. Royal Navy), jointly nominated by Malta, Singapore and the United Kingdom for the exemplary international effort, courage and tenacity displayed in the coordinated operation to rescue 13 crew members of the sunken tanker MT RAMA 2, off Oman, in very adverse weather and sea conditions. Determined and tireless efforts by merchant vessels in the vicinity, coupled with the skills and persistence of a professional search and rescue winching team, enabled the successful rescue of the 13 crew members from rough seas and extreme peril.

2. The crews of the rescue helicopters Helimer 202 and Helimer 207 of the Spanish Maritime Safety Agency, nominated by Spain for their courage and professionalism while risking their own lives to rescue 23 crew members from the general cargo ship Cheshire, which was laden with over 40,000 tons of fertilizer, on fire and adrift at sea. With dense toxic smoke filling the air, the helicopter crews navigated very hazardous flying conditions to make several successful attempts at rescuing all crew members, following which a huge explosion occurred on the vessel, highlighting the immense danger under which this rescue operation was carried out.

The certificates were received by Pilot Alfonso Gómez de las Heras, Co-pilot Raúl Nevado, and Rescuer Gregorio Jimmy Rodríguez, from the Helimer 207; and Winch Operator Albert Lara of the Helimer 202.

3. Captain Gaetano Gigliotti, on behalf of the officers and crew of the passenger ship Carnival Elation, nominated by the Cruise Lines International Association (CLIA) for their courage, skill and determination demonstrated in the rescue of a survivor found in a life raft, whose fishing vessel, the Captain Eddie, had flooded and sunk in storm force winds and seas. Three days before the rescue, with Hurricane Irma gathering in strength nearby, Gigliotti had navigated the Carnival Elation out of a Bahamas dry dock, with still incomplete repair work, in order to look for shelter ahead of the hurricane's predicted passage.

On September 10, 2017, following the flooding and sinking of the Captain Eddie, and amid 15-20 feet seas and 40-60 knot winds, Gigliotti carefully maneuvered the 70,000 ton, 260 meter long cruise ship towards the small life raft spotted on the horizon, in complete darkness. Gigliotti reacted decisively to the unfolding situation by turning the ship to the wind – despite the risk of flooding and danger to the crew – and by adjusting the ballast to mitigate the heavy seas.

Gigliotti was at the ceremony to receive the certificate. He was also reunited with Edward Potter, the rescued fisherman.

Letters of commendation have been sent to:

Xu Junlin, Xu Zhentao, Lu Ping and Feng Yajun, members of the Sanchi Explosion Emergency Dispatch Squad of the Shanghai Salvage Bureau. They were nominated by China, for their tremendous bravery and determination while attempting to locate survivors on board the burning Sanchi, facing great danger from toxic smoke and the constant threat of explosions.

Captain Guo Tianxin, Master of the rescue tugboat Nan Hai Jiu 116 of the Nan Hai Rescue Bureau. He was nominated by China for his extraordinary courage, expertise and determination in rescuing 77 crew members from four stranded ships and preventing damage to an oil depot during the severe Typhoon Hato.

Captain KE Ashok Kumar and the crew of the M/V Kodithala, nominated by India, for the professionalism and exceptional skills they displayed in the rescue of seven crew members of the MSV Al Noor, in the midst of Cyclone Okchi.

Captain Mahmoud Baghestani, Master of the oil tanker Stream. He was nominated by the Islamic Republic of Iran, for the great resolve and persistence displayed while rescuing all five crew of a capsized, and sinking fishing vessel, in bad weather.

Captain Sumant Varma and the crew of the M/V Dubai Knight. They were nominated by Panama, for outstanding professionalism and determination displayed during the successful rescue of 22 fishermen from two vessels, during Tropical Storm Mora.

Captain Roman Rudenko, Master of the firefighting small craft Chasovoy of the Northern Branch of the FSBI (Marine Rescue Service). He was nominated by the Russian Federation, for his leadership and courage while extinguishing a fire on board the docked vessel Odyssey-1.

Captain Fredrik Krysén and the crew of the M/V Undine. They were nominated by Sweden, and separately by the International Transport Workers' Federation (ITF), for the great professionalism, determination and ship-handling expertise displayed during the successful rescue of 13 crew of the sinking M/V Avatar, who were drifting in a liferaft and on top of floating containers, in dangerous seas and bad weather.

Captain Maxim Kireev and Chief Officer Anatoliy Yarovoy of the general cargo ship BBC ASIA. They were nominated by the International Transport Workers’ Federation (ITF) for their courage and great determination in rescuing all four crew of the yacht SPICA, by executing a highly dangerous, 15-hour towing operation, in stormy weather and gale force winds.