Emerald Waters And Snorkeling Among Corals: Find A Slice Of Paradise In Maldives

The Maldives is a water country. More water than country. I believe there are more fish here than humans. When I woke up on the island of Villingili, home to a Shangri-La resort, and stepped outside, there was the ocean, so green, it put my grandmother’s emerald ring to shame. The sand was powdery white

The Maldives is a water country. More water than country. I believe there are more fish here than humans. When I woke up on the island of Villingili, home to a Shangri-La resort, and stepped outside, there was the ocean, so green, it put my grandmother’s emerald ring to shame. The sand was powdery white and welcoming. There was a ladder from my deck, leading straight into the water. Manta rays and turtles were waiting to greet me when I dived in. I felt like a mermaid.

Home for me has always been by the sea. The daughter of a ship’s captain, I spent the first five years of my life at sea, and in Mumbai we have always lived a stone’s throw from the ocean. The Maldives is made up of thousands of stunning islands known as atolls. Getting there is half the fun—be it the spectacular views of the Indian Ocean, or being presented with a certificate for crossing the equator.

A car, three planes, a bus and a speedboat brought me to Shangri-La’s Villingili Resort & Spa. It may seem excessive, but it is not every day I wake up in paradise. The water villas at the resort have everything a weary traveller could ask for—huge bedrooms, king-size beds, luggage nooks, walk-in closets, double sinks, two showers and a tub, sizeable decks and floor-to-ceiling windows with views of the ocean. The villas are tastefully furnished and may be bigger than my Mumbai apartment.

The rich and famous flock here for golf, diving and for intimate incognito retreats. Their yachts and private planes stay docked close to the Shangri-La and I once accidentally swam too close to one of them. But on the island, we were all the same—tourists in awe of the spectacular ocean country.

I loved that I did not see a car for the 12 days I spent in the Maldives. Forget about Uber and surge pricing, the Shangri-La provided us with the cutest cycles to explore the island’s forest and get all the exercise we needed. There is a huge golf course with breathtaking sea views, but beware of the flying fox. This ominous mega bat inhabits the island and is intimidating at first, but exciting to spot thereafter. 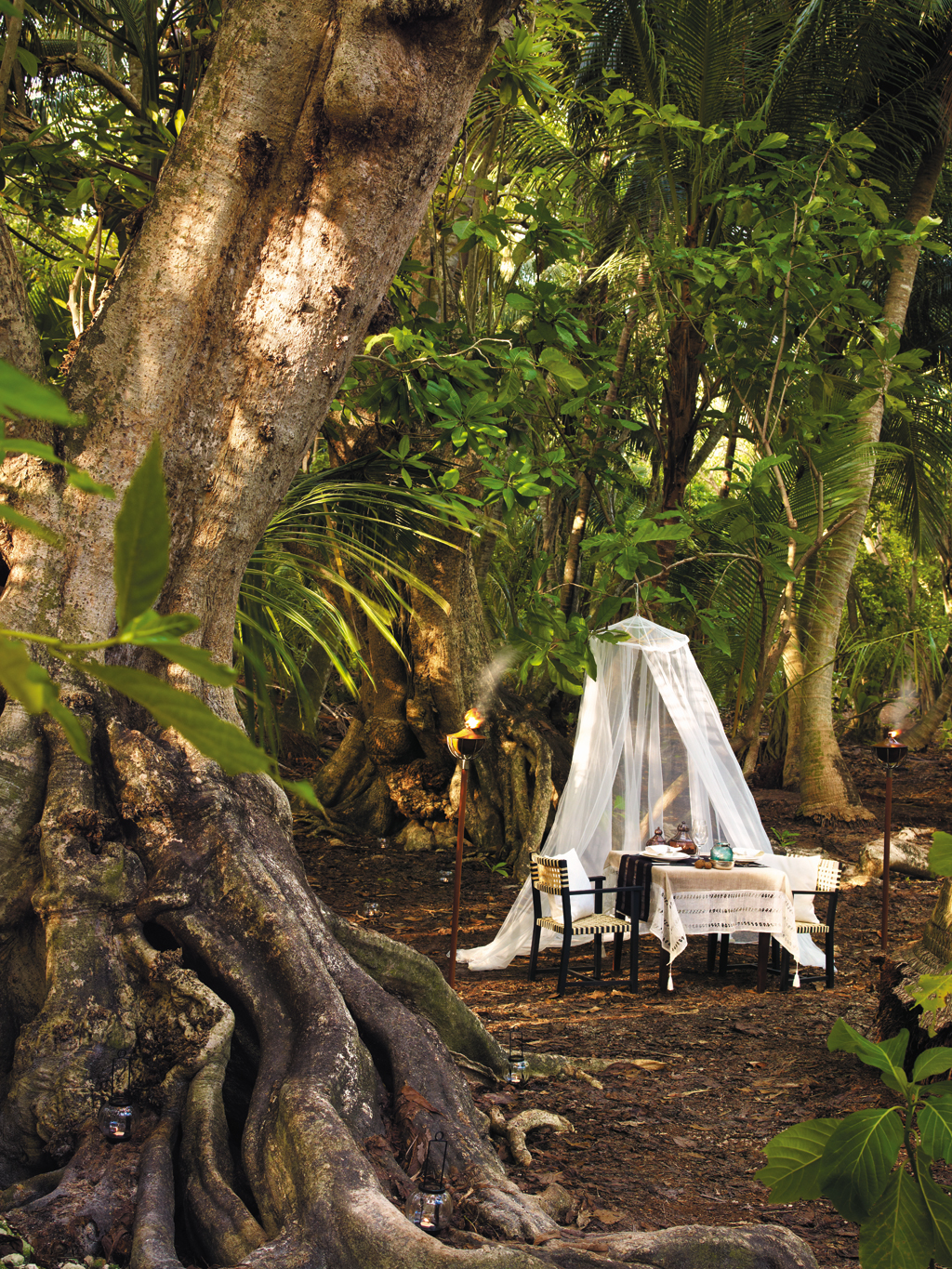 Whether it is a lavish buffet breakfast spread at Javvu, a family-style feast at Dr Ali’s, or Mediterranean delights at Fashala, the food options at the resort do not disappoint. I was surprised at how much variety there was among the three main dining venues—from rich flavourful curries to Middle Eastern mezzes. There is also a host of bars and lounges for when one fancies an island cocktail.

After Villingili, my next stop was Kandolhu. I arrived in style on a seaplane, but I was afraid that after the glamorous Shangri-La nothing would match up. The Kandolhu Maldives resort had a completely different vibe; it was quiet and secluded. The stunning, intimate island made me wonder if any honeymoon destination I pick would ever top this.

Despite the remoteness of the location, the water villas here are equipped with the latest GoPros, underwater selfie sticks and an iPad that has its own Kandolhu island playlist. The bathrooms were the best part, though. The bathtub was on my deck facing the ocean. It was a tough choice between the tub, the infinity pool and the ocean.

The snorkelling was the best I have ever done. I was surrounded by schools of brightly coloured fish and dazzling coral. When my hat fell into the water, I found myself swimming among three (harmless) sharks trying to retrieve it. 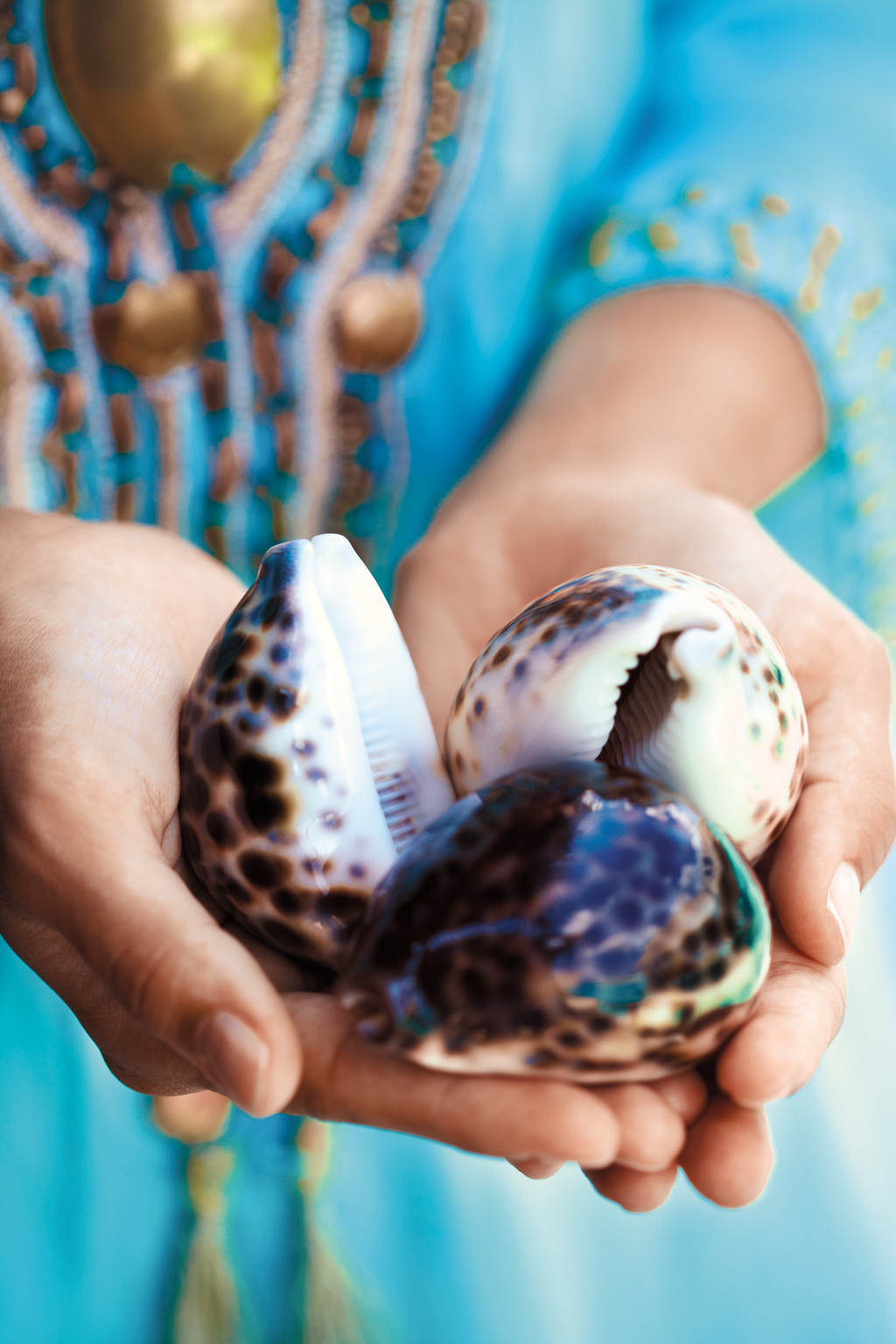 The Maldives grows nothing—it is an ocean country after all. Except fish and coconut, everything is imported. This makes things here rather expensive. It is such a contradiction that this is also where you find the world’s most luxurious hotels. There is nothing they do not have. But it is all imported. So, to keep it real, I only ate seafood. Tuna is a favourite here. They even have tuna salad for breakfast. It is spicy and fresh, and I devoured it every morning.

No visit to the Maldives is complete a visit to the spa. The CHI spa at the Shangri-La and the spa at Sun Siyam Iru Fushi island stood out among the rest, offering a wide variety of treatments and therapies. I recommend the cowrie shell massage with Maldivian coconut oil at the Shangri-La. They sing while they massage you. I fell asleep almost immediately, so I know I was happy.

For Villingili, fly to Maldives’ capital, Malé. SriLankan Airlines and Spicejet are some carriers that fly there. Then take a short Maldivian airline flight to Gan island, a five-minute boat ride to the Shangri-La resort. Kandolhu is 70kms from Malé airport, and a 25-minute seaplane ride away.

Javvu with its sumptuous international fare; Dr Ali’s with Indian, Middle-Eastern and Cantonese/Vietnamese delicacies; and Endheri for cocktails are some options at Shangri-La. Try The Market for all-day dining; Sea Grill for freshly caught seafood; and Banzai for Japanese at Kandolhu.

>Go on island and city tours, walks, reef explorations, night-fishing safaris, dolphin cruises, snorkel safaris, sunset cruises, scuba diving (for all levels of difficulty) and a host of other activities.

>Be pampered at the spa.

>Visit a local island near Kandolhu and have a Maldivian tea break.

>Enjoy a game at the nine-hole Villingili Golf Course.

>Participate in the fish-feeding programme.